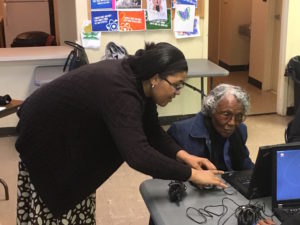 Digital learning instructor Beverly Williams, who is a resident of public housing, gives some hands-on help to Mattie Clay at the Wilson Housing Authority’s first digital learning class at Whitfield Homes Community Center. Clay, 86, said the chance to learn about computers and get the laptop when she was done with the classes pushed her out of the house to attended the digital training.

Mattie Clay wants to be able to do the same things that her children and grandchildren do.

Gloria Whitley wants to go back to school.

Her husband, Bobby Whitley, wants to do away with all of the paperwork that he has accumulated around their home.

For all of them, the key to unlocking their dreams is to learn how to use the computer to do the same tasks that many people now consider part of their daily lives.

The difference for them and for thousands of people like them in Wilson County is that computers aren’t part of their daily lives. The wealth of information and resources that are available at the simple click of mouse to anyone who has a computer isn’t available to those who don’t have one and don’t come in daily contact with them.

This split is known as the digital divide and to help residents of public housing in Wilson overcome it, the Wilson Housing Authority has partnered with the Kramden Institute of Durham to teach basic computer digital classes — 15 people at a time.

The classes are taught in four two-hour sessions and start with the basics, right down to how you properly turn a computer on and off. In addition to learning how to navigate your way around the computer and become familiar with it, other sessions teach residents how to use basic office programs, browse the internet, use social media and share information.

Anyone who attends all four sessions will receive a refurbished laptop computer, one year of technical support and a USB drive to store their information, all from Kramden.

The computers are being provided by a grant that was awarded to Kramden Institute. Kramden also provided training late last year to two people from the Wilson Housing Authority to teach the classes. One of the teachers is Cathy Kent, the housing authority’s resident services director, and the other is a public housing resident, Beverly Williams. Both of the teachers are receiving a stipend from Kramden for teaching the classes.

Kent recruited Williams to be the second teacher. Kent knew Williams was used to dealing with technology and has a good way with people, and felt she felt that Williams could use those skills to teach these computer skills to her fellow residents.

“I have grown up with all of this,” said Williams. “It is a beautiful opportunity for the people in housing and I am happy to be part of it.”

The classes are being taught at the Whitfield Homes Community Center and there will be two four-week sessions. The first session is underway and is full and there is a waiting list for the second session. If both sessions go well, there is a possibility of partnering with Kramden to offer more classes at a later date.

“There are many obstacles to overcome when creating programs to bridge the digital divide,” said Cari DelMariani, the director of programs for the Kramden Institute. “This partnership between Kramden and the Wilson Housing Authority is especially effective because it provides residents with not only devices but access to training and low cost internet. I believe this program will be a model we can easily replicate in many more N.C. communities.”

Offering the digital literacy classes is a continuation of the push that the Wilson Housing Authority has made in the last couple of years to improve the access that its public housing residents have to high-speed broadband services and to resources that will help them be able to take advantage of this access.

In 2016, the housing authority partnered with the city of Wilson’s Greenlight service to provide low-cost high-speed broadband access to nearly all of the Wilson Housing Authority’s public housing units. Currently, the deal, which includes high-speed broadband for $10 a month and a free Wi-Fi modem, is available to 591 public housing units and 235 families are taking advantage of it.

“Now that we have high-speed broadband available to most of our public housing units the next step is to help our residents become more digital literate so they can take advantage of all of the resources that are out there,” said Kelly Vick, president and CEO of the Wilson Housing Authority. “Partnering with the Kramden Institute and making this training and classes available is an important part of making sure that our public housing residents have the same opportunities that other people have.”

Gloria Whitley said the class and the chance at the free computer was enough to convince her that it was time to complete her GED and go back to school. The 61-year-old said she has worked and volunteered in schools much of her life, but that she would like to get more education so she could possibly work for Wilson County Schools.

As motivated as she is to complete the classes, she said her husband Bobby wanted to go before she did.

For Mattie Clay, 86, the chances to learn more about using computers is solely for her.

“I want to be able to use email and go on the internet,” Clay said. “I am glad that I am not too old to try something new.”

This story was produced by Wilson Housing Authority staff