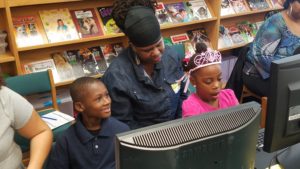 It was a promise fulfilled.

Dorothy Hinton, director of Community Partnerships and Programs of Communities in Schools of the Rocky Mount Region, said she talked about how the state could bring more resources to the area with Secretary of Information Technology and State Chief Information Officer Eric Boyette during his visit last year to deliver school supplies to D.S. Johnson Elementary School.

After some brainstorming, Boyette and his staff connected with the Kramden Institute, a nonprofit organization that collects, refurbishes and awards computers to students and families without a computer in their home, to work out a plan to help students through the use of computers.

On Friday, 50 second-grade students at Fairview Elementary School received refurbished desktop computers from the Kramden Institute. Hinton thanked Boyette, who is a native of Eastern North Carolina, for keeping his word in helping bring more resources to Nash-Rocky Mount schools in Edgecombe County.

Boyette said technology is the equalizer that erases geographic barriers.

“Whether we’re talking about economic growth, civic engagement, education or health care, technology is the key to the future,” he said. “Placing computers in the hands of these students will not only help them today, but it positions them for success in an interconnected, global world that is only limited by their imaginations.”

Hinton said factors like socioeconomics and students that had the greatest need for desktop computers went into the decison on who received the computers. Ann Edge, chairwoman of the Nash-Rocky Mount Board of Education, said giving students computers is an opportunity to decrease the digital divide and help them get connected to the 21st  Century online economy and society.

Hinton said providing students with access to technology in this digital age is more critical than it has ever been.

“At CIS, our mission is to surround students with a community of support, empowering them to stay in school and achieve in life,” she said. “For many children, a laptop expands opportunities for learning and helps them to understand that people in this community and around our state believe in them and want them to be successful. That is incredibly encouraging for a young person in challenging circumstances.”

The computer distribution was underwritten by a contribution from AT&T, which has a history of supporting and expanding educational opportunities that help students succeed both inside and outside the classroom, said Robert Doreauk, regional director of external affairs for AT&T North Carolina.

“We strongly believe that every child has the potential to achieve something great, regardless of your neighborhood or economic situations,” Doreauk said. “For a student, a computer is the key to unlocking the future and to fulfilling hopes and dreams. We are pleased to support the staff and volunteers of CIS as they work to make a difference in the lives of students and families.”

Take Control of Your Passwords
Scroll to top