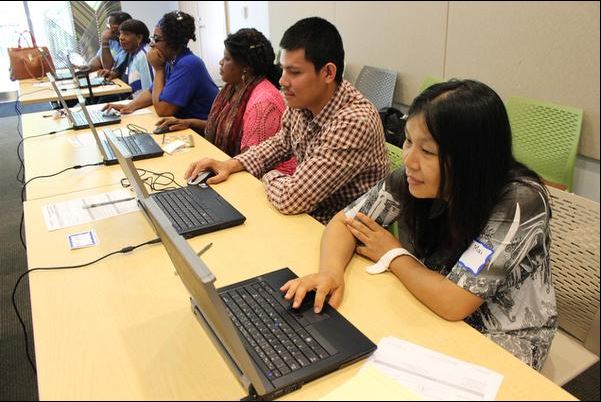 The town of Chapel Hill last month promised them the ability to connect, announcing a partnership to provide free Internet and laptops to residents of public housing.

Anyone who is interested can sign up for a series of digital literacy classes taught by employees of the Kramden Institute. Upon completing the classes, class participants will be able to take home a free refurbished laptop.

The Kramden Institute, founded in Durham in 2003, has donated more than 19,000 laptops across 71 of North Carolina’s 100 counties.

The town has partnered with Kramden to provide several series of four classes. Participants will learn computer basics, how to use office programs, how to share safely on the Internet and how to use media on the computer.

Class participants came to class with varied reasons about why they chose to participate. Some shared with their classmates what they’d like to learn.

Cassandra Farrington, who has lived in Chapel Hill all her life, said she wanted to take advantage of the opportunity to provide her 10-year-old son Author what he needs for school.

“He had a fourth grade project that was more on the level of a college project,” she said, describing the assignment that lasted all school year and required students to do research about North Carolina history and culture.

Farrington said that although she already knows computer basics through her job at Chapel Hill-Carrboro City Schools’ after-school program, it was good to take a refresher course. She also brought her aunt, who benefited from the basics class.

Berthe Mairounga, another participant in the class, is originally from Chad and has been in Chapel Hill for two years after spending two years in Durham. She also plans to use her computer for her children — four boys and two girls who range in age from 6 to 19.

Mairounga said that although all of her children know how to use the computer, she doesn’t know much about it.

Her kids attend Northside Elementary, Smith Middle and Chapel Hill High. She said that when they have homework, they have to wait in line to use the family’s one desktop computer.

Because having a laptop would help her kids with school, Mairounga decided to take the digital literacy classes along with the English as Second Language and citizenship classes she already takes.

Sarah Viñas, housing and community planner for the town, said the recent class was over capacity. The town will offer two more sessions in August and October, and the August classes are already almost full, she said.

Viñas said the town is open to continuing the digital literacy program past October if there is continued interest.

The free Internet will be provided by AT&T through a regional program called North Carolina Next Generation. In Chapel Hill, AT&T will offer Internet in the majority of the town’s public housing units for five years, as well as Internet in five community sites for seven years.

Viñas said eight of the public housing neighborhoods will be able to participate in the program. Internet build-out is currently taking place, and five neighborhoods should have access by August — just in time for school to start.

Viñas said that some of the town’s residents already pay for Internet, which underscores what a “tremendous necessity” an Internet connection is.

“They’re prioritizing this over other things,” she said. “We’re really excited to help residents check one bill off their list when they’re already burdened with being low-income.”

Author, who goes to Seawell Elementary School, is happy he’ll soon have a computer at home and an Internet connection for the next five years.

“He’ll probably go on the YouTube and play games, too,” Farrington said. “He’s still going to be limited on how much time he has on the computer. You don’t want them stuck on the computer all the time. You’d rather have them outside playing.”