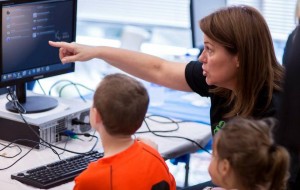 What if, though, Burkes had not had access to computers as a kid? How would he have expressed his natural aptitude? Burkes grew up before the height of the information age, when a hobbyist approach to computers was possible. Today, those without access to technology are at a severe disadvantage.

Today, as the Kramden Institute’s technology education coordinator, Burkes works to make these machines he loves and has made a career with accessible to anyone, regardless of income.

“I realized how lucky I was to have grown up with computers,” Burkes says. “Kramden gives me a chance to help provide computers and computer training to those who aren’t as fortunate.”

At its Durham headquarters, Kramden collects thousands of donated computers. Volunteers refurbish them, load them with Kramden’s own open source operating system and award them to students and adults who wouldn’t have access otherwise.

In 2015, technology can make a difference in success at school or in the job market, and Kramden wants to close that gap, one user at a time.

“Our official mission is to provide technology, tools and training to bridge the digital divide,” says Executive Director Michael Abensour. “It’s computers today, but who knows what it’ll be tomorrow?”

Kramden provides modern devices that can compete professionally – and that last. Their Ubermix operating system resists spyware and malware: after awarding 7,000-8,000 computers running Ubermix over its two-plus years, Kramden has never gotten a call about a virus.

Plus, Kramden is constantly upgrading its machines. At the bare minimum, these are dual core desktops with flatscreen LCDs and 80 GB hard drives. These won’t run graphics-heavy games, but they’ll keep up with the computers in corporate offices just fine – in fact, that’s exactly where many of the computers were before donation.

“The computers themselves are pretty sturdy,” Abensour says. “This is what companies buy for their own workforce.”

At the start, Kramden focused on giving its machines to students in need. Then, about 19 months ago, it started offering digital literacy training for adults. The idea was to demystify computers, and the resulting course teaches everything from computer basics to Internet safety and the use of creativity software. At the end of four weeks, participants are rewarded with a refurbished computer. This can make a huge difference, particularly in the modern job market.

“Everybody now has to apply online for a job,” Abensour says. “The days of coming in with a paper resume in hand and applying for a job like that, those days are quickly disappearing.” Schoolwork, too, is increasingly done online, and parents need computer access to track their kids’ progress or contact teachers.

Accordingly, Kramden always needs more computers. Machines in any state are accepted, from top-dollar or barely obsolete devices to old and broken ones. If a company wants to donate 30 or more computers, Abensour says, Kramden will happily come pick them up: they have three loading docks and can accommodate any quantity.

“That laptop in your closet could be used by one of our students,” Burkes says. “Your company’s retired PCs could get a second life in the homes of students who’ve never had a computer before.”