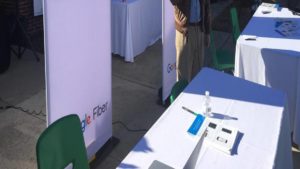 Reposted from the Herald Sun. Read the original story here.

In the Laurel Oaks neighborhood, if it happens, Shaqueelah Shaw knows about it.

That’s why she was first in line when she heard Google Fiber was coming to her neighborhood.

Google, the tech company best known for its online search engine, is bringing its high-speed internet service to Durham one neighborhood at a time.

Shaw said having Google as an option for internet service was a huge blessing. She was switching from a pay service to the free Google service and will save about $70 per month, which is the cost of the company’s Fiber 1000 plan.

“I knew about Google but not Google Fiber,” Shaw said. “When they came to my house and talked about it with me, I knew it was going to be good for my family and all the residents here. I’m one of the most active residents out here and I let others know what’s going on. I try to keep everyone aware because there are so many changes we’re seeing.”

Laurel Oaks, which is near the intersection of East Cornwallis Road and Alston Avenue, has 30 apartments that all received the Fiber internet connection. It was chosen because of its proximity to Google’s main Fiber line and for the high number of families with school-age children living there.

Daniel Hudgins, who is chairman of the DHA board of commissioners, said Laurel Oaks was an ideal candidate for the program.

“This broadband access will be such a benefit for the families with school-age children,” Hudgins said.

Laurel Oaks, which is one of 16 Durham Housing Authority neighborhoods in the city, is one of the smaller communities.

It took about 18 months for the project, which is part of a federal HUD program called ConnectHome Community, to become a reality.

Wicks said this is a national initiative and Durham was chosen to be among the first cities to participate.

Faster internet is not the only service being offered. Residents are receiving digital literacy training and support, too.

The non-profit Kramden Institute is offering free refurbished computers so that they can get online.“We’ve done more than bring internet,” said Google community impact manager Tia Bethea. “We’ve had digital literacy training as well as followup classes for residents. We’ve made sure everyone has a device in their home and now we’re bringing service to them and the neighborhood. There are so many benefits of having a faster internet connection for people looking for jobs and helping their children with their homework.”

Durham Mayor Steve Schewel said Google’s presence in Durham will continue to grow beyond its program with the DHA.

“This is wonderful,” Schewel said. “This neighborhood is receiving the highest speed internet Google offers. And as Google expands into Durham, they’re going to be continuing to wire other neighborhoods, including more Durham Housing Authority communities.”