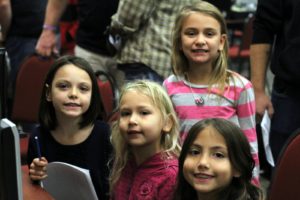 Reposted from the Fayetteville Observer. Read the original story here.

Caiden and Kinsley Thompson were attentive as a technician showed them different parts of their new computer, which parents Jessica and Shawn said would be put to good use for homework assignments this year.

“They’re always asking me to be on the computer,” said Jessica, explaining the family has one laptop computer that is mostly used for her husband’s work.

Now, through a computer giveaway program, the family will have another option to help the children complete their own assignments.

Donated computers are refurbished by Lenovo and Kramden Institute, which then work through Fort Bragg and other military installations in North Carolina to distribute to children of military families. More than 1,250 computers have been donated through the program.

“What matters is we’re putting technology in the hands of folks,” said Scott Ottman, vice president of Lenovo sales operations.

Before receiving their computers, families met with experts for a tutorial on usage.

It’s the sixth year Lenovo and Kramden Institute have donated computers to Fort Bragg children. Families are selected through an application process.

The donated computers help children tackle homework assignments without competing for time on the family computer, said Gerhard Guevarra, a school liaison officer for Fort Bragg’s Children and Youth Services. He said he understands children count on computers to complete assignments, but not every child has access to computers at home.

“When a family doesn’t have a computer at home, they can still do things, but that’s an inconvenience,” he said, noting that children can stay after school to use the computer labs. “This program tries to level the playing field for all kids in school.”