Last week we launched our first ever Drone Flight Camp and it was awesome! Twelve middle school students from around the Triangle joined us downtown to fly drones, learn about the industry and jobs, train on drone racing simulators, and participate in a variety of tasks, missions, and races. They came in at a variety of levels–some had flown (and crashed!) RC helicopters and quadcopters while others had never flown before. At the end of the week, everybody went home with skills that will allow them to fly accurately and responsibly. We may have nicked a few fingers and smoked a few motors, but there’s no better way to learn! 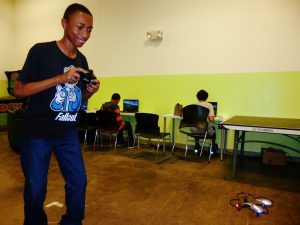 The first few days of camp were centered on learning the principles of flight and the specific characteristics of quadcopter operation. Each student was required to perform a series of simple but focused tasks, each one building on the other. To save batteries and propellers, some of these tasks were performed on FPV Freerider, a terrific simulator used for the emerging hobby of drone racing! Organized into teams, each ‘flight crew’ was responsible for keeping track of each other’s progress and practicing safety. As they got more comfortable and honed their skills, some of the students were able to fly using First Person View, piloting by watching a real time camera feed from the drone’s point of view while the other team members acted as spotters and navigators. Using the FPV the students worked through several scenarios. The most successful mission that every team got to try was inspecting a bridge for structural weaknesses–in this scenario the team was required to fly close and hover near special markers that would simulate the condition of certain points on the bridge, recording that data on video, then analyzing it back at ‘base camp.’ 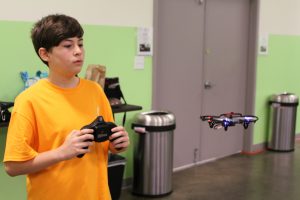 While it was mostly fun and games, we did take some time to talk about how drones have and will be used and the precautions we should all take moving forward. By far, the most fun I had was Thursday morning when each of the teams got to participate in a racing tournament! Using obstacles and checkpoints, we created a relay race system so each team member had a section of the track for which they were responsible. The cheers and chants from the bleachers was deafening!

Every day Sarah and I got to hear a bit from the parents about how much their kids were enjoying camp, which is always great. There were even several parents that wanted to take a drone class and were wondering when we’d let some adults play (stay tuned…). I think it’s safe to say we all had a great time and are looking forward to many more of these in the future. 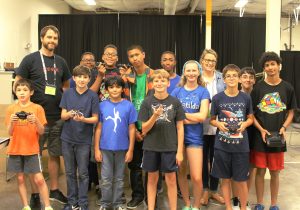 We could not have done this without the support of others. First and foremost we’d like to thank Rob and Tucker at ReCity for donating the space and accommodating all of us for a whole week! The Cary-based Forge Initiative loaned us six drones and some obstacles–thank you! Special thanks to John, the developer of FPV Freerider, who donated four software licenses for us! And finally, one of our newest employees, Sarah Huff! Sarah is a teacher that has joined us to assist in our first two camps and is so much fun! Sarah, you are great with the kids and help keep everything organized, cheerful, and silly!

Susan Sperbeck is Geek of the Week
Scroll to top