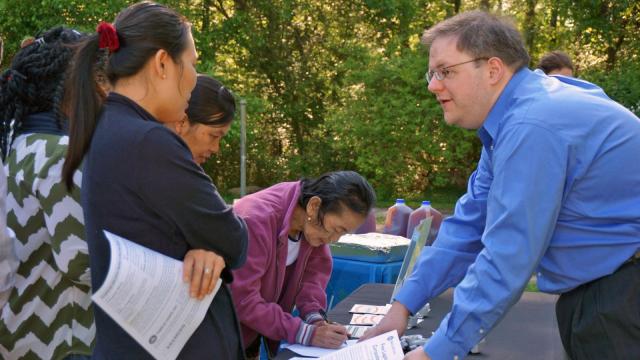 The program will roll out to eight of the town’s 13 public housing neighborhoods by the end of the year, bringing AT&T U-verse connections with speeds of up to 3 Mbps for five years. The company is participating in the program as part of an agreement with the N.C. Next Generation Network, an initiative of several municipalities and research universities, and will provide service at no cost to the town.

“The Internet brings the world into your living room, and bridging the digital divide and bringing internet to everyone has been an important part of the goals we’ve set for our community,” Mayor Mark Kleinschmidt said during a news conference Friday.

Once the units are wired for the Internet services, residents will be able to call AT&T to sign up through a special call in number the town and company will announce later.

Residents of Chapel Hill public housing ages 14 and up can also get a free, refurbished laptop if they complete a four-part computer training class with the nonprofit Kramden Institute. The courses will cover a range of topics including computer basics and standard office programs.

Kleinschmidt said having access to the Internet is vital for education and job creation. A survey by the town last year of public housing residents with school-aged children found one in four households reporting not having Internet access at home.

“I’m not standing here with a banner behind me that says ‘mission accomplished.'” We all know that. And it doesn’t meet all the needs of the people in low-income areas of our town, whether public housing or elsewhere,” Kleinschmidt said. “But we will go further, because we need to expand opportunities for education, research and job creation and drive economic growth.”