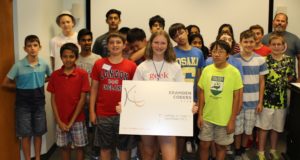 Last February, Kramden volunteers Ashlyn VanDine and her father Ken began Kramden Coders Club. After 18 months, 12 club meetings, and 2 Intro to Programming workshops, more than 100 middle school students from all over the Triangle have taken part in fun programming projects. Ashlyn, who is entering 8th grade at Rogers-Herr Middle School and is a Kramden SuperGeek, writes:

“In Coders Club, we’ve had some great fun with the Raspberry Pi computers, learning about Python as well as physical computing. We’ve built a laser tripwire using light sensors and LED lights. We’ve worked with buttons, lights, resistors, and buzzers. We’ve learned how to interface with Minecraft Pi using Python, making a teleport button which would teleport the player to a location when the physical button is pushed. We’ve created puzzle boxes and games using the motion sensors and LEDs on the Sense HAT attachment, and programmed music in Sonic Pi.”

We’re grateful to the Raleigh ISSA chapter for donating 10 Raspberry Pi computer kits, and to the many volunteers who have helped out at club meetings. Coders Club meets again this month. 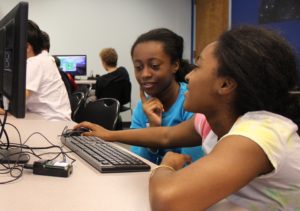 25 Kramden computers are being put to use by the Housing Authority of Bowling Green. Check out the article below from the Bowling Green Daily News to learn more.

In an effort to increase accessibility, the Housing Authority of Bowling Green received 25 new computers for its two computer labs.

Charter Communications donated the desktop computers, and an event Thursday at the housing authority’s learning center marked the occasion.

Kathye Gumm, project manager for the housing authority, said the new computers, which have been installed in the labs, are essential for children and adults who rely increasingly on the internet.

“The kids all have homework they have to do and adults come in to do job searches,” Gumm said. “These computers will get a lot of use.”

In addition to the many after-school and summer learning programs for students, the learning center computer labs are often used by people who file their taxes in the early months of the year, Gumm said.

The Reach Higher Welfare to Work Program also makes use of the computer labs.

Participants in the program work in a housing authority department for 30 hours a week and take part in four weekly hours of job and life-skills training at the lab.

“If you don’t have access to the internet, you’re going to fall behind,” Gumm said.

Along with the donated computers, Charter announced the introduction of a high-speed broadband internet service aimed at low-income households.

Spectrum Internet Assist will be available to families with students who participate in the National School Lunch Program and seniors 65 or older who receive Supplemental Security Income program benefits.

“We have a lot of people who have access to the internet but don’t have the financial means to get it,” said Jason Keller of Charter, which is partnering with the housing authority to launch the service.

“After the library closes, you’ll see kids sitting outside and it shouldn’t be like that,” Gumm said. “They should be safe in their homes online instead of outside looking for a hot spot.” 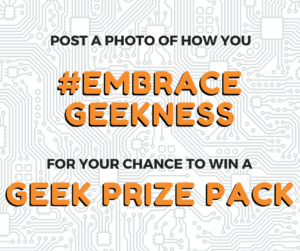 Next Thursday (7/13) is Embrace Geekness Day and to celebrate we are holding a social media contest. Show and tell us how you embrace geekness and you will be entered to win a Geek Prize Pack.

Remember, being a geek isn’t necessarily about loving computers. Geek icon Wil Wheaton put it best when he said “It’s not about what you love. It’s about how you love it.”  Show us how you pursue your passion, whether it’s video games, playing trumpet, or even knitting socks. 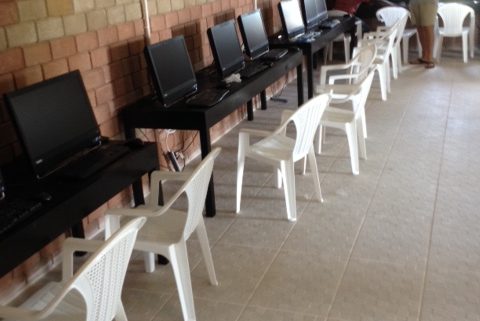 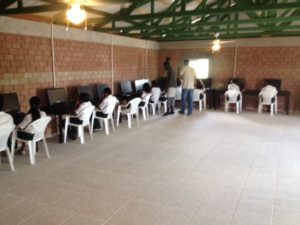 Working with our longtime partner Rise Against Hunger (formerly Stop Hunger Now), 15 Kramden computers are in Belize. The systems are set up in a computer lab at Silk Grass Methodist School in the Stann Creek district of southern Belize. Southern Belize has a significantly higher rate of poverty than the northern part of the country and in the Stann Creek District, only 6 of the 36 primary schools had computers for the students to use.

A representative from KidzKonnect4Jesus, the local organization Rise Against Hunger partners with for their work in Belize, had this to say:

“For the vast majority of the 350 students at Silk Grass Methodist School in southern Belize, they touched the keyboard of a computer for the very first time thanks to the donation of much needed computers.  This includes children 13 and 14 years old.  The basic math and spelling programs preloaded captivated their attention like nothing we’ve ever seen before.  The teachers were amazed at the unusually calm and patient behavior as they waited quietly for their turn.  While we are early on with this program, everyone is very excited about this being a real “game changer” to drastically improve our learning process and literacy rates.” 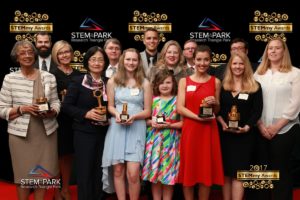 One of our awesome Super Geek volunteers, Ashlyn VanDine, was presented with the STEM Student of the Year 7-12 award at the Second Annual STEMmy Awards. The STEMmy awards, hosted by STEM in the Park, recognize students, educators, and organizations for the great work they are doing in STEM fields. Congratulations Ashlyn!

A full list of this year’s winners and pictures from the ceremony can be found here. 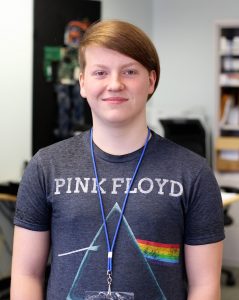 Sam Smith is Geek of the Week! Sam is a regular at our Mini Geek-A-Thon (MGAT) events and an expert ‘runner’, helping set up computers for the demonstration part of the award and helping families get everything loaded into their cars. He is a truly dependable volunteer, always ready to help out with whatever task is needed and is a key part of making our weekend events run smoothly and is a great example of a Kramden Super Geek. Thank you, Sam for all of the help you give Kramden!

What is your favorite thing about volunteering with Kramden? I like to feel that I’m making an impact on others. I have the privilege of using a computer every day, for school and recreational purposes. It’s truly one thing that can majorly impact one’s life.

Best Kramden Moment? During an MGAT, I was a runner for a very gracious family. They were very friendly, kind people. It seemed to me they felt a bit of assurance for their son’s future with the addition of a computer in their household. It made me feel all “warm-inside” to know they were grateful for everything Kramden did for them.

When you are not volunteering at Kramden, what do you do? Besides school and the occasional video game, I experiment with new hardware and software for the server room in my house. I’ve set up full-on database servers to simple media servers. I enjoy taking something apart, understanding how it works or what was wrong with it, and reconstructing it for reuse.
https://kramden.org/kramden/wp-content/uploads/GOTW-logo-square.png 377 377 Kramden Institute https://kramden.org/kramden/wp-content/uploads/Kramden-Logo-Web-padded-1030x314.png Kramden Institute2017-05-02 14:33:592017-05-02 14:35:49Geek of the Week – Sam Smith

WINSTON-SALEM, N.C. — Throughout the day on Thursday, parents pulled in front of Petree Elementary School thankful for a generous gift.

“It’s going to be a big help to everything. It will help me because that way [I don’t have to] be on their backs about their homework,” parent Thomas Williams said.

Free refurbished computers were provided to 100 families at the school who did not have a computer at home.

“We have a lot of smartphones, those have been a real savior for a lot, but there’s still that divide of being able to do schoolwork on a screen that they can see,” said Lynda Goff, executive director of WinstonNet.

“We’ve been making an effort to come to Winston-Salem and the Triad and try to get more computers into the schools here,” said Michael Abensour, Kramden Institute executive director.

It was an exciting moment for children like third-grade student Ciara Angove.

She had been using a tablet with an attachable keyboard, but looks forward to having a computer at home.

“If I have to write something, I might use the icon where we can write and then put it on a piece of paper,” she said.

“I can use it to look up stuff I haven’t learned yet like math,” fourth-grade student Deja Cunningham said.

On Friday, families at Bolton Elementary School will receive free computers bringing the total to 200 families helped by this initiative. 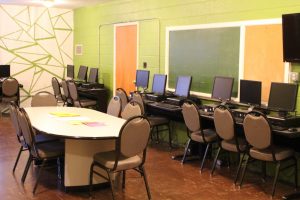 The Southeast Raleigh community now has a new resource to help bridge the digital divide.  Bernadette McAllister, a longtime  advocate for digital inclusion and job readiness, has launched a training facility at Fellowship Raleigh to help meet the community’s needs. With support from Kramden Institute and Digital Inclusion Fellow Mike Byrd, Mrs. McAllister received 14 refurbished computers for the Southeast Raleigh Computer Center. The computer award from the Kramden Institute was funded in part by a grant from the Nonprofit Technology Network (NTEN).

The Southeast Raleigh Computer Center will offer the Jobs For Life job readiness program  as well as digital literacy classes to residents of the community. On March 3, 2017 Mrs. McAllister and her volunteer staff hosted an open house for the Southeast Raleigh Computer Center which was attended by Raleigh City Council member Corey Branch, a strong advocate on city council for Southeast Raleigh residents. The Jobs for Life and digital literacy training started the following week on March 7, 2017 and the program currently has 10 participants from the community enrolled.

The Olympics is an amazing event. Thousands of athletes representing hundreds of countries come together every two years to compete. Millions of people around the world watch the best of the best give everything they have, every ounce of strength and skill, to win a medal. When the games take place in Tokyo in 2020, those medals will hold a little extra meaning.

Organizers of the Tokyo games recently announced plans to collect millions of used cell phones and other electronics from the Japanese public and use the metal recovered from recycling the e-waste to produce the medals. With collection boxes planned for more than 2,400 NTT DOCOMO stores and public offices around the country, the committee hopes to collect eight tons of metal (gold: 40 kg, silver: 4920 kg, bronze: 2944 kg) in order to produce the 5,000 medals for the Olympic and Paralympic games.

In a press release, Ashton Eaton, a two-time Olympic gold medalist and world record holder said, “The weight of a medal around your neck is always a good weight and when an athlete at Tokyo wins a medal, the weight of it will not be from the gold, silver or bronze; it will be the weight of a nation. The awesomeness of this project makes me want to come out of retirement and compete for one.”