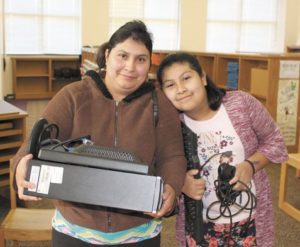 Sixty students at Bailey Elementary who did not previously have a computer in their home now have access to one thanks to a recent partnership between the Kramden Institute of Durham and Southern Bank.

The partnership worked directly with the Kramden Tech Scholars program, which is a program that helps the institute donate computers to students in grades 3-12 who do not have one at home.

Funding assistance provided through Southern Bank insures no family incurs any cost to receive a computer.

Children receiving computers were selected through a survey that was done of the school’s fourth and fifth graders to determine home computer needs. Once all of the responses were collected and processed, it was determined that fourth grade had the higher need.

Earlier grades were not considered because they do not utilize computer-based end of grade testing like the fourth and fifth grade levels do. Fifth grade students already have digital devices through the Nash-Rocky Mount Public Schools 1:1 digital initiative.

“We are so grateful to receive this grant, as it will provide our students more digital educational opportunities.” said Bailey Elementary School Principal Mary Jones. “I would like to thank the Kramden Institute and Southern Bank for funding this program and making it possible for families in our school to become more digital.”

“Ensuring students have the digital resources they need in order to succeed in the classroom is critical, so we thank the Kramden Institute and Southern Bank for providing the needed resources for many of our students,” Said NRMS Superintendent Dr. Shelton Jefferies.

“We appreciate their generosity and are thankful they have allowed our district to be part of this program on many occasions,” he said.